This was a good opportunity for us to contribute, share insights and build on our commitment to better support disabled employees and interns. 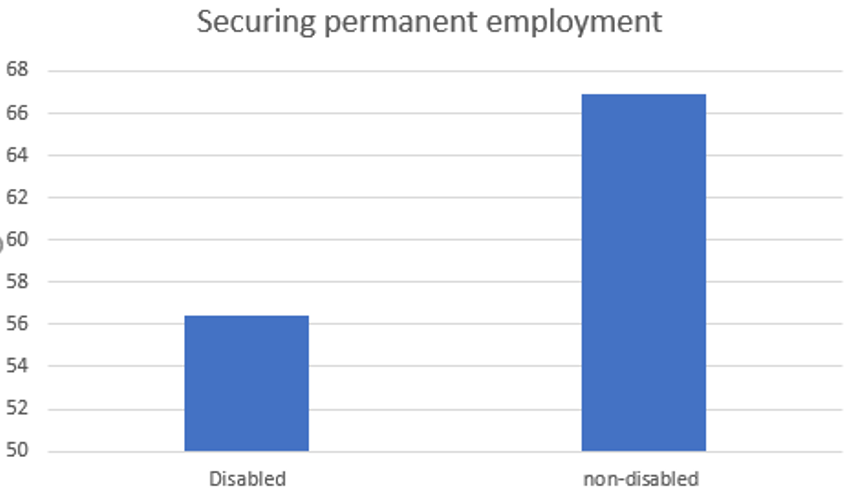 The Adjustments Passport captures the student’s adjustments and support that they may have had whilst in education and any revised support they may need in the workplace.

Adjustment passports can be a useful tool to help disabled staff and employers work together to make the appropriate adjustments that allow for improved employment outcomes.

The passport’s aim is to empower the passport holder to have the confidence to have conversations with employers by:

During each day of Equality, Diversity and Human Rights Week 2022, #EQW2022, (https://www.nhsemployers.org/articles/equality-diversity-and-human-rights-week-2022)  #FutureGenetics will highlight its commitment to empowering society by proactively addressing UK health inequalities that have persisted for decades (https://www.kingsfund.org.uk/publications/health-people-ethnic-minority-groups-england).

There has been a longstanding issue of under-representation of women in science. The UK statistics speak for themselves (https://www.stemwomen.com/blog/2021/01/women-in-stem-percentages-of-women-in-stem-statistics%C2%A0).

Lack of colour at the top

The reality is that we should have more women and ethnic minority representation, and particularly importantly in senior positions rather than the typically white male boardrooms that dominate many UK organisations (https://diversityq.com/small-listed-companies-dominated-by-white-men/ and https://www.ft.com/content/409ae838-1040-11e9-b2f2-f4c566a4fc5f), and with respect to the #NHS and #healthcare, where the ethnic minority Board representation “is just 11.1% across all NHS trusts and foundation trusts” (https://www.nhsconfed.org/publications/strengthening-nhs-board-diversity-report)

Our Commitment to Women and Ethnic Minorities

Future Genetics has had a longstanding commitment to help address this disparity by providing equal opportunities for employment and internships to females and ethnic minority candidates. This mission has then evolved through engagement with a programme devised by the #University of Birmingham, #Newman University and #University College Birmingham (https://intranet.birmingham.ac.uk/as/employability/careers/transformation-wm/employers/reverse-mentoring.aspx) that led to the development and formalisation of our Diversity & Inclusion Recruitment Programme (https://futuregenetics.co.uk/opportunities).

Many of our other posts show the diversity of our staff and interns both past and present. Several staff who have recently completed Future Genetics 6-month employment programmes via a government funded scheme have now moved onto some fantastic permanent employment, and we are confident that these young individuals will make their positive impression on society.

During each day of Equality, Diversity and Human Rights Week 2022, #EQW2022, (https://www.nhsemployers.org/articles/equality-diversity-and-human-rights-week-2022)  #FutureGenetics will highlight its commitment to empowering society by proactively addressing UK health inequalities that have persisted for decades (https://www.kingsfund.org.uk/publications/health-people-ethnic-minority-groups-england).

The first post is on our EMPOWER-1 Multi-site Clinical Cohort Research Study (the largest study of its kind), which looks at Reducing UK Health Inequalities (https://clinicaltrials.gov/ct2/show/NCT03987633).

The video clip is from Equality Diversity in Science Symposium (2019) that was held at the Francis Crick Institute (programme: https://edisgroup.org/events/edis-symposium-2019-inclusive-research-and-experimental-design/). 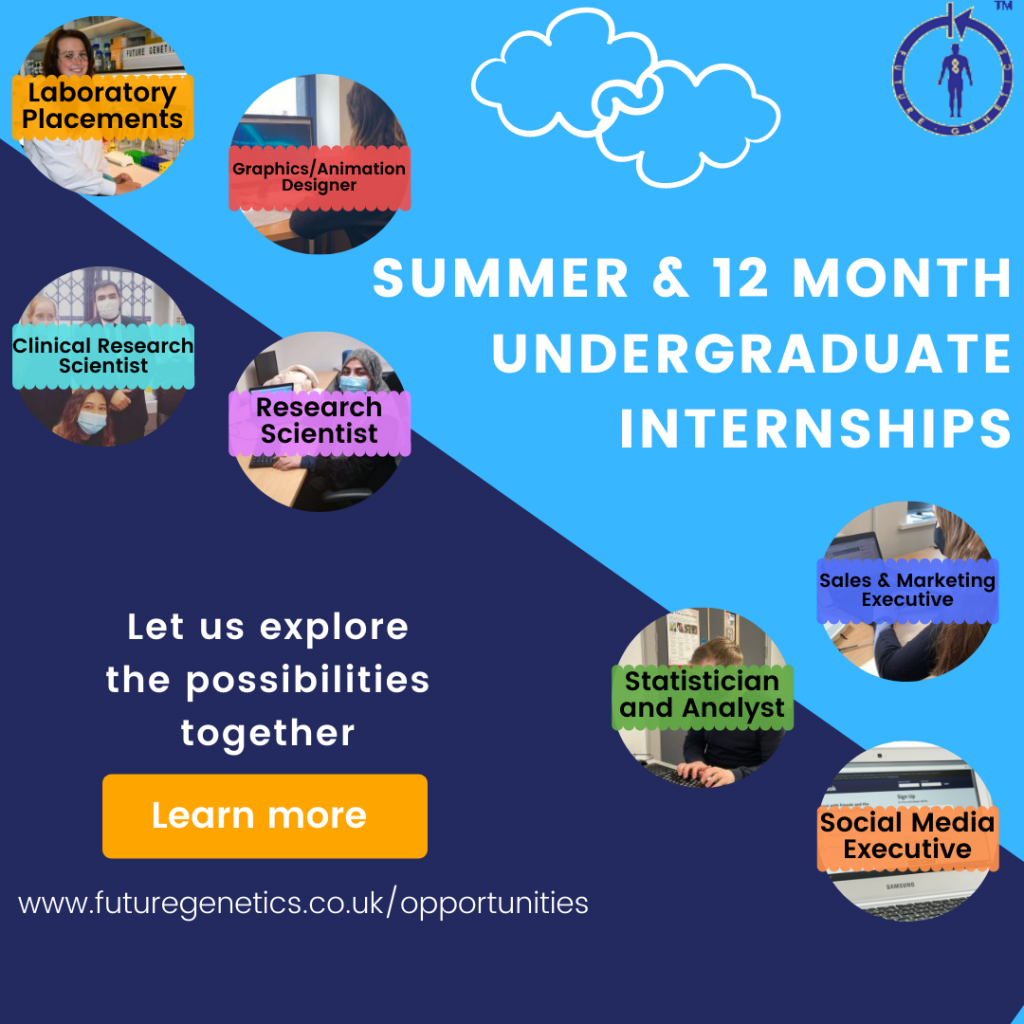 On the 19th of June chief operating officer or COO, Rukhsana Malik and CEO and medical director Dr Mohmmed Kamran attended the University of Birmingham’s 13th annual research poster conference, which is considered by the university as one of their flagship events. It was a brilliant event and the talent of the researchers was evident, the graduate school did a brilliant job and we were grateful to be invited. The event hosted over 100 research abstracts that summarised research activities carried out by the doctoral candidates across multiple disciplines ranging from arts, and law, environmental, dental, physical, and life sciences. One of these candidates was Yiran Ai.

Yiran Ai is a doctoral candidate at the University of Birmingham. Her research

is based on gender perspectives in feminist films with Western directors and those in Hong Kong exploring the interpretations of feminism in the two cultures. The Western feminist films Yiran is studying include The Piano (Jane Campion, 1993) and About My Mother (Pedro Almodóvar, 1999), she is also studying Summer Snow (Ann Hui, 1995) and Centre Stage (Stanley Kwan, 1991), which are by directors from Hong Kong. The focus of the study is gender identity as well as relationships between males and females.

One thing that stood out in Yiran’s research was the fact that a feminist film in no way equates to women’s cinema, they don’t have to be about women’s issues, they shouldn’t just be aimed at women, rather it should be about destroying the image that there are limitations to gender roles. Gender shouldn’t be a defining characteristic that prevents character development. Yiran was also keen to point out that directors of

feminist films didn’t have to be female, the films she is studying are directed by men and women. The feminist aspect is far more about female character development from passive to “active, aggressive and independent”.

Yiran poses that diversity and equality are vital, feminist films should show intersectionality and question not only gender roles but prejudices in ethnicity and race.

The connection between a feminist film expert and a company working in clinical research may seem tenuous but we were so enthused by Yiran’s passion in her plea for social equality and we couldn’t help but hear the echoes of her work throughout our own. Future Genetics has always been about empowering people to take part in clinical trials to improve health equality and outcomes for themselves. It is equally important for us, at Future Genetics, to see equality improve in every aspect of our lives.

Healthcare and social injustice have often gone hand in hand. The 1980s saw one of the most frightening epidemics in recent history, AIDs spread quickly throughout gay communities across Europe and America with no immediately apparent cause. This led to a campaign of fear and isolation by homophobic groups leading to sufferers being refused treatment and research being delayed and ultimately resulting in thousands of unnecessary deaths.

Gender and racial inequality can themselves take their toll on an individuals mental and physical health. Ethnic minorities are three times more likely to be refused entry to a bar, restaurant or club and women are far less likely to progress to Executive roles within their companies, only 7% of FTSE 100 companies are run by women. Social and professional isolation can lead to mental health issues such as depression and anxiety which themselves are as much a risk factor for mortality as high blood pressure obesity and smoking.

Yiran’s work could have massive implications on these issues, if we see an increase in equality within the media, if we see a rise in the production of feminist films we can change the narrative and see our society reach a position where women and minorities can reach positions of power and the situation you are born, work and live in will no longer pose a risk to one’s health.

Inequality is rife but so is empowerment, we are moving towards a society of acceptance and equality for all, we are starting to check our privilege and use that to further each other’s causes. The world has come on in leaps and bounds even in the past 30 years and the work that Yiran is doing will have implications, not only on producers in Hollywood but on minority groups and women working in all sectors, the true equality that Yiran looks for will be vital in the coming years to create an interesting and prosperous society.

On the 2nd of July our clinical researcher lead, Kash Arfan and I attended the Healthcare Aspirations event at Aston University.

The event was aimed at secondary school students aged 14-17 who are aiming to go into healthcare related careers so we leapt at the opportunity to show them what a career in genetics could be like. For some students this was the first they’d heard of clinical trials and their relation to healthcare, many had arrived at the event with the aspirations of a career in primary care but came to realise that perhaps they’d like the more lab based career that companies such as Future Genetics offer.

Students from all across Birmingham came to the city centre university to discuss their futures. Staff from many healthcare professions as well as from Life Sciences courses at several Birmingham-based universities, congregated in Aston’s great hall and we loved sharing our work with people in our field as well as answering the various questions the students had. We enjoyed answering an eclectic range of questions on the effects of clinical trials on the general population, what they thought of health inequality and even how the budding scientists could follow a career in genetics and clinical research.

After a successful morning discussing our work Kash was invited to speak on the panel ‘What Does it Take to Pursue a Career in Healthcare?’ along-side Karen Newberry, a senior lecturer in the occupational health department at the University of Derby. This was a great opportunity to s

hare what we love about our work, the challenges we’re presented with and how, and why it’s all worth it. Mrs Newberry informed the students that one of her favourite things about being an occupational therapist was seeing the affects her work has in helping people live a normal, pain-free life. I think, in this, she summed up our ethos, she could empower people to work and enjoy themselves around their pain and improve their quality of life.

We were also glad to be able to empower the students to take charge of their future, we hope we gave them the tools to investigate their options further. Some were the first in their family hoping to go to university; some knew exactly what they wanted to do but needed to know how to get there; some of them knew they were interested in healthcare but were shocked by the diverse nature of the sector. We were delighted by the interest everyone showed in the possibility of a career in genetics as well as the enthusiasm they showed for ending the health

inequality we discussed. We found it reassuring that they were outraged by the issue and were interested in how we’re working to solve it.

We’re celebrating the Teams at the Postgraduate Enterprise Summer School, so we’ve put together some photos of each team from the event, congratulations to everyone involved. Here is the team that was voted 1st place – Alice

We’re celebrating the Teams at the Postgraduate Enterprise Summer School, so we’ve put together some photos of each team from the event, congratulations to everyone involved. Here is the team that was voted 2nd place – Alice

We’re celebrating the Teams at the Postgraduate Enterprise Summer School, so we’ve put together some photos of each team from the event, congratulations to everyone involved. Here is the team that was voted 3rd place – Alice

We’re celebrating the Teams at the Postgraduate Enterprise Summer School, so we’ve put together some photos of each team from the event, congratulations to everyone involved. Here are the teams that were voted 4th place – Alice