During the week beginning 10th June 2019 the University of Birmingham has been hosting their annual Postgraduate Enterprise Summer School, this year we have been lucky enough to collaborate with the university to set the promising postgrads a real-world challenge to tackle.

According to students, this course came highly recommended by those who participated in the past, so we were excited to get involved.

Each team, comprised of six students, was asked to come up with a solution to the challenge that Future Genetics has been working to solve: How can we tackle inequality in healthcare? 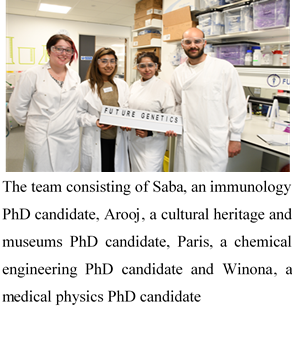 Saba, an immunology PhD candidate stated that she took part in the summer school as she wanted to diversify her skill set, her research is heavily lab- based, and she wanted to try something more ‘out the box’. She added that she liked how the summer school has offered her a real-world problem that required applying the problem-solving skills she has learned throughout her scientific education. Arooj, a cultural heritage and museums PhD candidate, pointed out ‘As someone from Oman this project has really made me think about the distributions of medicines and their context, it’s made me question how many medicines are designed and made in the west for Caucasian populations’. The students that took part came from many different academic backgrounds, their subjects ranged from linguistics to life sciences but everyone found something they could relate back to their studies, whether that was simply putting the skills they’ve acquired into practice or using their knowledge to think of innovative solutions. One law student was particularly interested in the impacts our work could have on government policy in the future, whether we could use it to incentivize people to take part or whether it would one day be mandatory to have representative clinical trials.

When setting the project, we informed the students of the extent of health inequality in the UK. The overwhelming majority of people within clinical trial groups are Caucasian and between 18 and 65. This leaves a huge proportion of the population either underrepresented or entirely excluded. There are genetic differences between every population no matter how similar they appear, for example, the genetic variant that cause the lung condition cystic fibrosis is much more prevalent in the white Irish population than in the rest of the European Caucasian population. Studies have shown that 2.23% of genes are different across 18 Indian populations, although this seems low, in genetic terms it is a sizable difference that could have massive effects on the way they react to medication (Papiha, 1996).

incredibly important issue that needs more awareness, many remarked that they were shocked that it was an issue, some knew there was healthcare inequality among different groups but were alarmed at the true extent of the under-representation.. They were all enthused by the idea of working in multidisciplinary, and aptly, multicultural teams with people hailing from all over the world. One liver disease and drug safety student referred to 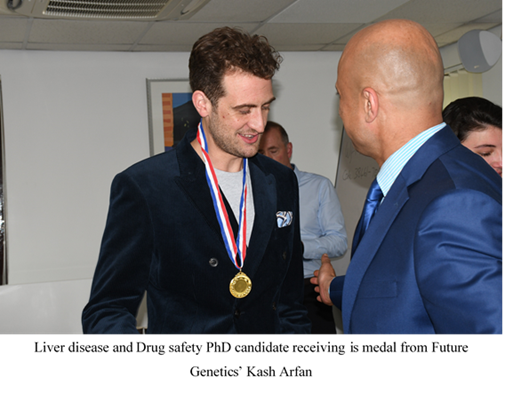 himself as a ‘one-man band’ when working in a lab and remarked on how nice it was to be working in teams that were all heading towards the same goal.

As you may be aware the problem we set is the problem Future Genetics was created to tackle, health inequalities in minorities is a massive issue in the UK and one we are set on solving. 14% of our population is unrepresented in the health care system. That’s not to say there has been no attempt to solve this issue, for example, the yellow card scheme has been set up by the government to help tackle adverse drug reactions in patients. It gives an easy to use platform to report problems with a drug whether that be a safety concern, for example overheating of E-cigarettes, or a medical concern such as a drug not working. (Yellowcard.mhra.gov.uk, 2019) This scheme is vitally important in the healthcare system, but it’s massively underused, the MHRA (the governing body that runs the yellow card scheme) says “ADRs themselves are thought to occur in 10-20% of hospital in-patients, and one study found that over 2% of patients admitted with an adverse drug reaction died, approximately 0.15% of all patients admitted” (Assets.publishing.service.gov.uk, 2019) this shows quite how dangerous they can be but only 0-5% are reported in the UK, shockingly this drops to 1% within Europe

Future Genetics is proud to empower people from different backgrounds to get involved in clinical trials and take charge of their health and seeing the interest and enthusiasm from the range of participants in this summer school makes us positive that our study will make a massive difference.